This barn is the tithe barn of Parsonage Farm and was built to house the tithes of crops and produce paid to the rector of the parish church. Parsonage Farm was sold in 1921 and the barn has been converted to houses, while retaining some of its original features. 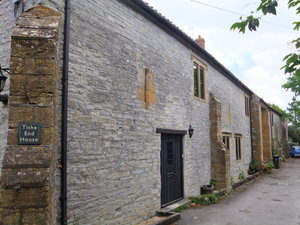 Behind Tithe Barn is the Parsonage. This was part of the old rectorial estate, which was owned by Muchelney Abbey. In the early 1900s a doctor lived in this building, who after a trip to Italy, returned with small pieces of patterned iron. His plan was to make some beautiful gates for the Parsonage, in a similar style to these patterned pieces of metal. A local blacksmith recreated the gates, which can still be seen. The tour now returns back down Kirkham Street, past the sports field, down to the end of the street. to the Market Square

If you continue up the road towards The Globe, there is a large building on the right. It is by now no surprise that this building is yet another with a long and intriguing history behind it.

The British Red Cross event will be held on Zoom. Join us for another live zoom gardening workshop. The evening will once again be hosted by Nigel Cox, Senior Horticulture, and this time we are also delighted to be joined by guest speaker, Christine Skelmersdale. Christine is the owner of Broadleigh Gardens, Bishops Hull, a nursery specialising in unusual and S. African bulbs and she is also a well-known lecturer. As Christine says, "we have the best gardens but very few of our plants originate in this country so just where do your favourite garden plants come from? The event is free although a donation would be very much appreciated if you are able to make one. For more information on the event and to register/donate please click on the link below: https://www.eventbrite.com/e/grow-your-own-in-a-somerset-garden-part-two-where-did-your-garden-grow-tickets-146345363923 https://www.justgiving.com/fundraising-edit/gardening2